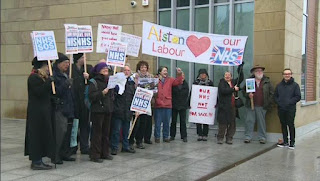 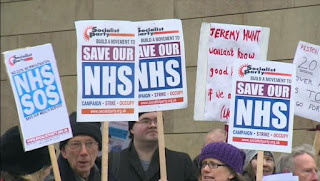 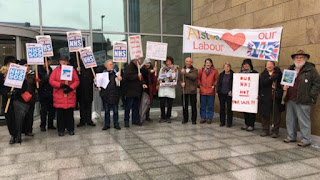 Cumbria Health Campaigns Together including the Socialist Party protested outside the County Council offices calling for the Council to use its powers to oppose the "Success Regime" which means cuts and closures and will open the door to the further privatisation of our NHS. Chants of "Save our NHS" were met by peeps of support from passing motorists! 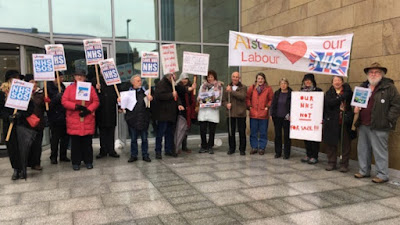 http://www.itv.com/news/border/update/2017-03-22/protestors-gather-ahead-of-healthcare-meeting/
Posted by DT at 05:53 No comments: 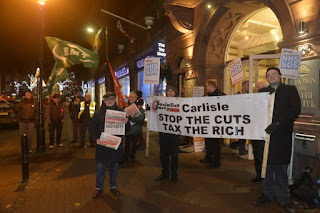 On Tuesday Carlisle Socialist Party, along with trade unionists and other community activists protested outside the Success Regime's public consultation in Carlisle.
We then went into the meeting to join campaigners from west Cumbria, Alston and Carlisle and elsewhere, who tackled the 5-member panel on the options for healthcare services presented in their document, all of which involve cuts to cottage hospital beds and the downgrading of services at the West Cumberland Hospital. Community activists highlighted the dangers of transferring women in labour by ambulance to the already overstretched Cumberland Infirmary, and campaigners from Alston repeatedly pointed out the impossibility of residents being treated at Penrith or Carlisle. Despite the panel trying to restrict the meeting to a meaningless question and answer session, activists successfully opened it up to longer contributions from the floor. Panel members were heckled when they attempted to deny the changes were caused by budget cuts, and told that none of their options were acceptable to the meeting. We put the matter to a vote, and every one of the hundreds of members present voted to reject all of the plans. Nevertheless, the chair of Cumbria Clinical Commissioning Group intends to press ahead. The public were left in no doubt that this was a sham consultation designed merely to discharge the CCG's legal duty
Campaign groups will now organise the next stage in opposing these cuts, including building towards the national NHS demo on 4th March next year.

Posted by Robert the Bruce at 15:47 No comments:

The Vue cinema put on showings of Ken Loach's I, Daniel Blake that exposes the cruelty and bureaucratic harassment of Britain's dysfunctional benefits system on 17th November. Carlisle Socialists leafleted outside the venue recieving a positive response. Everyone got a copy of our Defend the NHS leaflet and 27 people bought a copy of the Socialist newspaper. 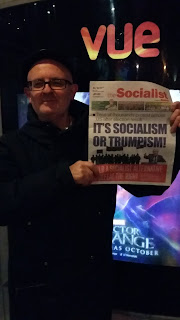 Today, Wednesday 9th of Novemeber, members and supporters of Carlisle Socialist Party handed over our petition calling for maintaining the existing number of care beds in Cumbria. Our covering letter. A link to the write up in the News and Star. 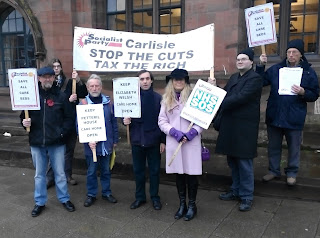 Tomorrow, Carlisle Socialist Party will be handing over the petition against the loss of care home beds at the Courts, Carlisle at 1pm (best to arrive a little sooner). Over five Saturdays we collected in the region of 1 300 signatures. We would welcome anyone to come along and show support.
Posted by DT at 08:10 No comments:

We were very pleased that you were re-elected and fended off the attempt to return the LP to “New Labour” and its programme of unfair cuts to public services. It’s clear that you have the support of hundreds of thousands of people who want to campaign against austerity. That’s the immediate gain for declaring Labour to be an “anti-austerity party” and points the way to winning mass support at a future general election.

So we are writing to you on behalf of 1,000 Cumbrians to ask you to use your influence on your members on Cumbria county council in the hope that they will scrap their plan to halve the number of care home beds under their direct control.

The seven local authority owned care homes in Cumbria don’t meet statutory standards  and have to be replaced by new ones with better facilities – which we all support, of course. But the council has announced plans to halve the number of beds it will provide from 117 to 60 to save costs. Together with plans from the cynically misnamed “Success Regime” (sent into Cumbria by NHS bosses acting on behalf of the government) to close the beds in several cottage hospitals, these short-sighted cuts will inevitably lead to a crisis in social care and in the local NHS too. Respite care will become all but impossible; leaving old or frail people at home and relying on short home visits (which exclude shopping, cooking, housework etc) are a cop-out from social responsibility; and one consequence will be increased “bed-blocking” of hospital beds.

In recent years Blairite Labour county councillors have used coalitions with the Tories (yes, with the Tories!) and now with the Lib-Dems to dutifully implement Osborne’s deficit reduction plan, without any serious opposition. Now they are attacking the most vulnerable members of our community by implementing cuts to social care, public health and school nurses determined by Osborne’s last April budget – as part of a timetable now abandoned by Osborne and May as unachievable. The crisis in social care is having such an effect on the NHS that even Hammond may make concessions in his Autumn Statement.

We therefore ask you to set a clear signal of Labour’s new course by calling on your county councillors to stop these cuts. The new care homes must at least maintain if not improve the current provision, with the required number of staff.

This is an opportunity to show the public that Tory cuts are not aimed at “cutting waste” in a “bloated bureaucracy” but about permanently destroying historical social gains and vital, frontline services. Labour councillors should therefore make a public demand for the government to provide the necessary funds.

Jeremy, ordinary people here are outraged by this latest attack. Not one person has publicly defended it. Over 1,000 people have already come to our stall to sign our petition and express their anger. We’ve heard them call local councillors all sorts of names, but “heroes” wasn’t one of them. We know that you and your supporters are honest in opposing austerity and offering a clear alternative policy, but seeing “Labour” councillors just doing the Tories’ dirty work for them will damage the credibility of your message. Action speaks louder than words, and this planned action seems almost designed to sabotage the attempt by you and your activists to inspire and mobilise the poorest and most downtrodden to help you oust the Tories.

Secretary, Carlisle Socialist Party
Posted by DT at 06:53 No comments: